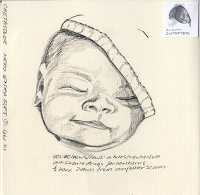 Diane and I have been drawing faces and people in cafe's, with the regulation milk jugs, salt and pepper pots when we were frustrated by ourselves or the people moving. Or up and leaving just when I have drawn an ear! I have been wanting to improve and become more familiar with proportions so that I lose the uncomfortableness when trying to draw a likeness. I just am at sea, all over the place. We set ourselves a goal to draw 10 different aspects, and ages, supposedly to take 10 minutes for each. I gave up drawing at the cafe and decided to draw from the computer screen. So that I can learn the basics - what is next to what and in line with ?  Choosing an image of a baby I did the above, it took me half an hour! I decided to print off a small photocopy to remind me, but I did not draw from it. 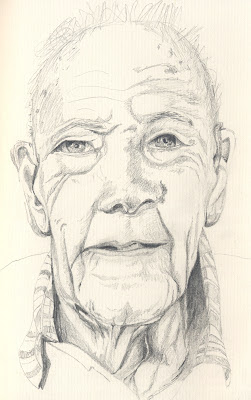 I selected an iPhoto in my album, one that I think I took of my father in law and thought it would be a better test for my drawing. Like a ten year old attempting  a uni degree, knowing what you are supposed to do but not knowing how to do it. This does not look like Ron! He is in his middle 90's. Done on text laid cream paper with a pilot propelling pencil 0.5 H225.
This was drawn in a series of 20 minute blocks, and all up was about 1 3/4 hours! So much for 10 minutes.
Posted by Hillary at 11:27 am

All content, including drawings, images, and photographs, posted here Copyright © 2006-2017 Hillary Barnes. All rights reserved. Please do not copy, use or reproduce them without asking permission.